Beijing is situated at the northern tip of the roughly triangular North China Plain, which opens to the south and east of the city. Mountains to the north, northwest and west shield the city and northern China's agricultural heartland from the encroaching desert steppes. The northwestern part of the municipality, especially Yanqing County and Huairou District, are dominated by the Jundu Mountains, while the western part is framed by the Western Hills, or Xishan. The Great Wall of China, which stretches across the northern part of Beijing Municipality, made use of this rugged topography to defend against nomadic incursions from the steppes. Mount Dongling, in the Western Hills and on the border with Hebei, is the municipality's highest point, with an altitude of 2,303 metres (7,556 ft).

Beijing has a rather dry, monsoon-influenced humid continental climate, characterised by hot, humid summers due to the East Asian monsoon, and generally cold, windy, dry winters that reflect the influence of the vast Siberian anticyclone. Spring can bear witness to sandstorms blowing in from the Mongolian steppe, accompanied by rapidly warming, but generally dry, conditions. Autumn, like spring, sees little rain, but is crisp and short. The monthly daily average temperature in January is ?3.7 °C (25.3 °F), while in July it is 26.2 °C (79.2 °F). Precipitation averages around 570 mm (22.4 in) annually, with the great majority of it falling in the summer months. Extremes have ranged from ?27.4 to 42.6 °C (-17 to 109 °F).

Beijing's climate is defined as "continental monsoon." The four seasons are distinctly recognizable. Spring and autumn is the best time to be in Beijing, particularly in the months of April, May, September and October. 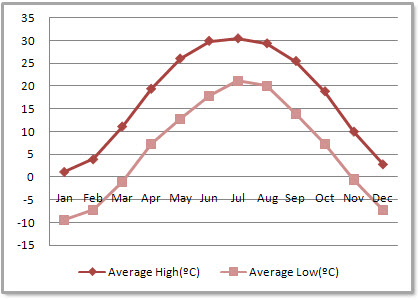 Spring and autumn are shorter than summer and winter. Although winter is technically longer, that should not keep you from travelling to Beijing as indoor heating is widely available. Nevertheless, as the indoor/outdoor temperature difference is rather large, travelers should be prepared with warm clothing and a thick coat is recommended for the colder months of the year. In winter, off-season discounts are to be had as well.

The Best Time to Visit Beijing
Autumn (September to November) is considered the best time to visit Beijing as at this time it has very pleasant weather and fewer tourists.
Spring can be quite windy but again not as many tourists. The whole city wakes up with trees sprouting and flowers blooming. Beijing is an enchanting place to spend your spring when the flowers are in full bloom.

What to wear in Beijing
In Spring (March to May) and Autumn (September to November), jeans and a sweater are usually enough.

In Summer (June to August), T-shirts and light pants or shorts are the best.

In Winter (November to February), it is wise to dress in layers: long underwear and jeans, shirt, sweater and down jacket.Rain gear is necessary, especially during the summer months.