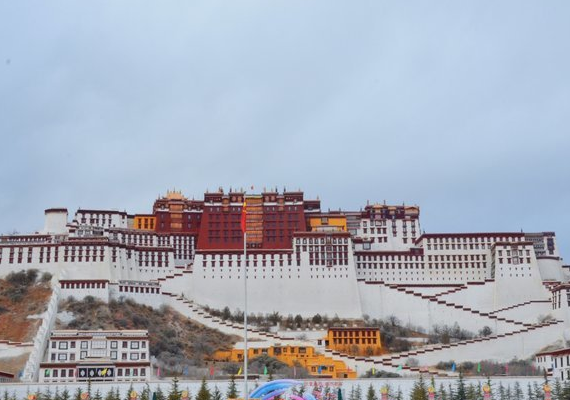 Overview of Lhasa
Lhasa (or the "ground of the Gods") has been the capital city of Tibet Autonomous Region since the 7th Century when Songsten Gampo built his palace where the Potala now stands and attempted to unify the various clans fighting in the area.

This is the first stop for most visitors to Tibet and, although the journey here is not as exciting as it once was, a trip here is still an essential part of any visit to Tibet.  Although Lhasa is famous for being one of the highest cities in the world, a towering 3,600 meters above the banks of the Lhasa River, what really knocks you out here is the full scale impact on your senses of the breathtaking beauty, unique landscape and the holy atmosphere of this religious center.

Background
Lhasa literally means "place of the gods". Ancient Tibetan documents and inscriptions demonstrate that the place was called Rasa, which either meant "goats' place", or, as a contraction of rawe sa, a "place surrounded by a wall," or 'enclosure', suggesting that the site was originally a hunting preserve within the royal residence on Marpori Hill. Lhasa is first recorded as the name, referring to the area's temple of Jowo, in a treaty drawn up between China and Tibet in 822 C.E

Lhasa Local Features
Religious Center
Lhasa is officially the capital city of the Tibetan Autonomous Region and the political, economic and cultural center of Tibet. But all these come second to the important role that Lhasa plays as the religious center of the Tibetan world. A throng of pilgrims from all directions arrive here, kowtowing towards Lhasa every three steps, towards their life long destination of the golden roof of the Jokhang Temple. A glimpse of these people allows for an understanding of the importance that Lhasa holds  in the heart of the Tibetan people.

Three out of the six most important Tibetan Buddhist Monasteries are in Lhasa.   Almost one third of Tibetan Lamas practice and live in Lhasa, home to some of the world's richest religious relics. These facts alone cannot sufficiently illustrate the importance of the city in religious terms. Only by exposing oneself to the sophisticated and well established religious atmosphere of Lhasa can you truly understand the existence and the everlasting spirit of the Tibetan people.

The City of the Sun
Mixed with the fragrant smoke from yak butter candles lit throughout the temples and households of this holy city, the dazzling sunshine in Lhasa adds to the religious holiness of this Buddhist center. Under the brilliant sun, the gold gilded roofs of the temples shine under the clear blue sky. The green fields, black yak cattle and white snow-capped mountains within sight all help to make this is a wonderfully picturesque spot.

Although not officially the highest point in Tibet, 3700m-high-Lhasa is probably the closest spot to the holy Buddhist world and the city enjoys 3000 hours of sunshine a year. In all seasons, there is hardly a cloud in the sky and, even when it rains, this rarely lasts for long. Sunshine and clear blue sky are guaranteed gifts for visitors to this city.

However, visitors should be aware of the dangers involved in sunbathing here. make sure you carry plenty of drinking water, sunglasses and sun block at all times. 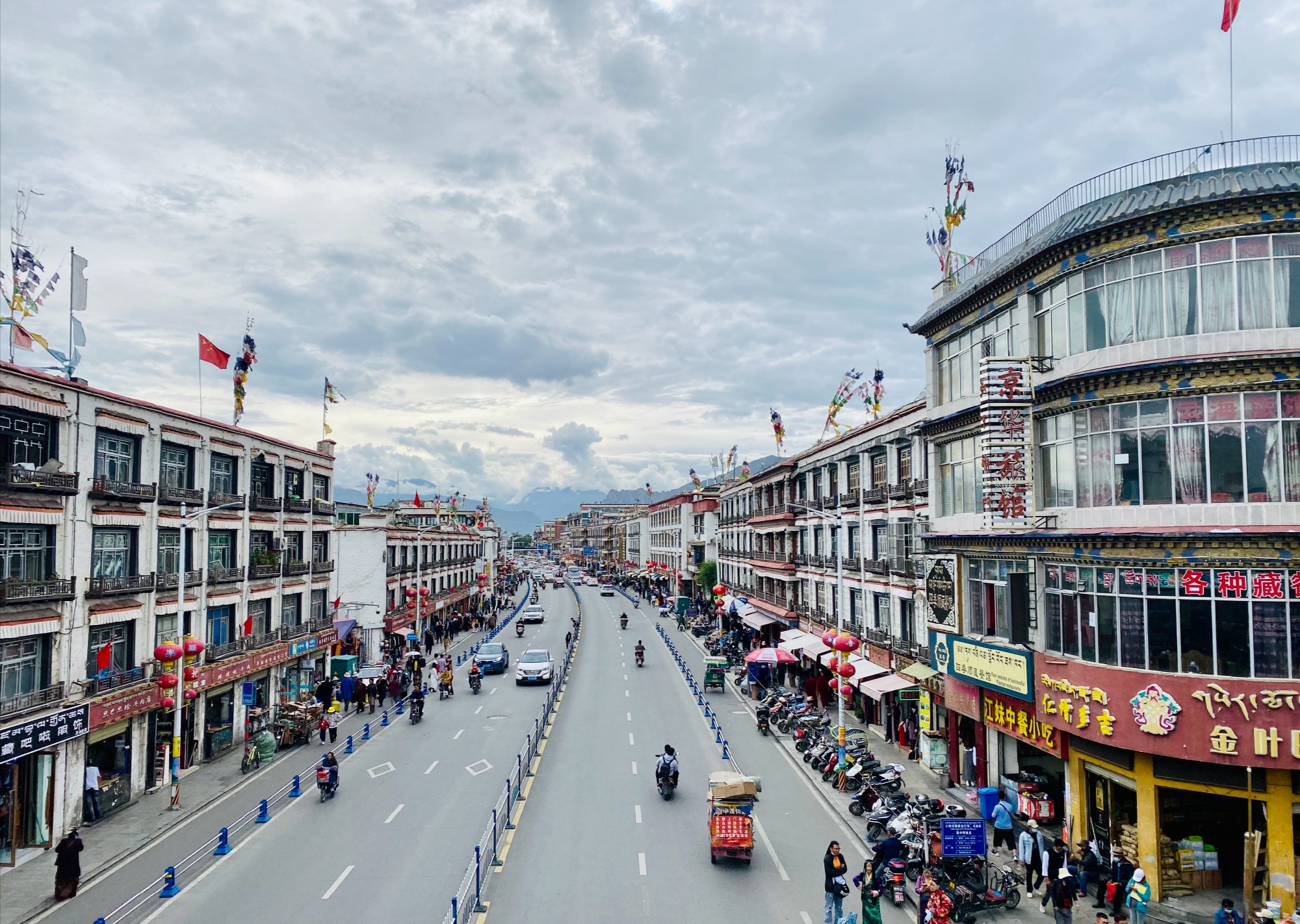 Climate & Weather
Lhasa is situated close to the border of Nepal and China, on the northern flanks of the Himalayas and 3,600 meters from the banks of the Lhasa River. This area is fairly inaccessible for tourists between December and January due to the heavy snowfall and poor weather conditions.

August is the rainy season here when landslides are common. The hottest month here is June, with high temperatures of 22 degrees C. The sun here can be very strong too, so make sure you take plenty of sunblock and a hat to protect from the harsh rays. 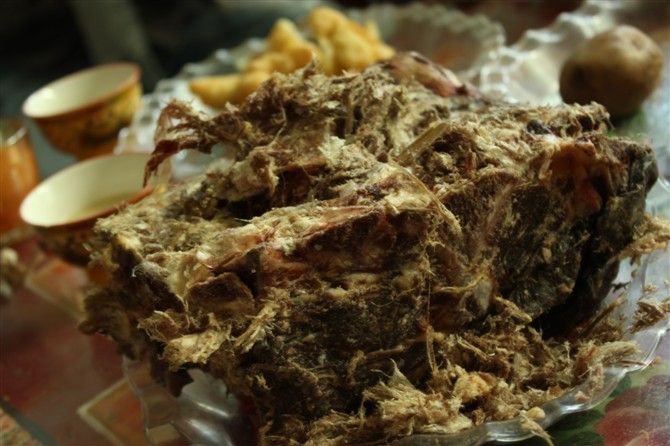 Blood Sausage
Blood sausage is made of yak's and sheep's blood, which is very popular among Tibetan. Most Chinese visitors will be fond of it but for Christian foreigners, blood sausage won't be added on their menu. 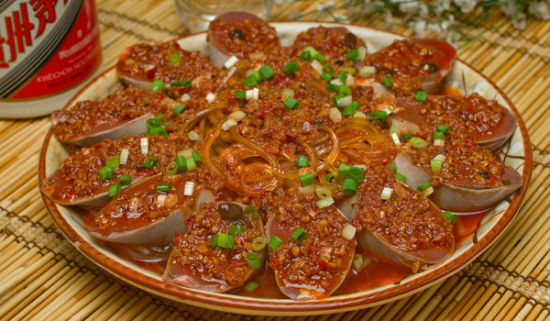 Butter Tea
Butter Tea is the main drink in Tibetan’s daily life, made from butter, brick tea and salt. People of the Zang nationality have the habit of drinking it, which is said to help digestion. The hospitable Tibetan welcomes their guests with Butter tea, and it is impolite to refuse it. The Tea Party has been running through all kinds of klatch. 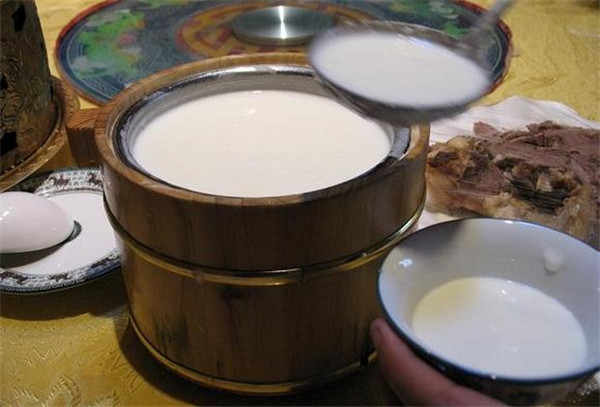 Tsampa
Tsampa or Tsamba is a Tibetan and Himalayan Nepalese staple foodstuff, particularly prominent in the central part of the region. It is roasted flour, usually barley flour and sometimes also wheat flour. It is usually mixed with the salty Tibetan butter tea. 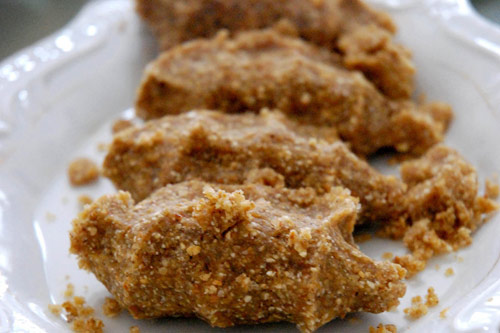 Lhasa Attractions
Potala Palace
The Potala Palace in Lhasa, Tibet Autonomous Region was the residence of the Dalai Lama until the 14th Dalai Lama fled to India during the 1959 Tibetan uprising. It is now a museum and World Heritage Site. 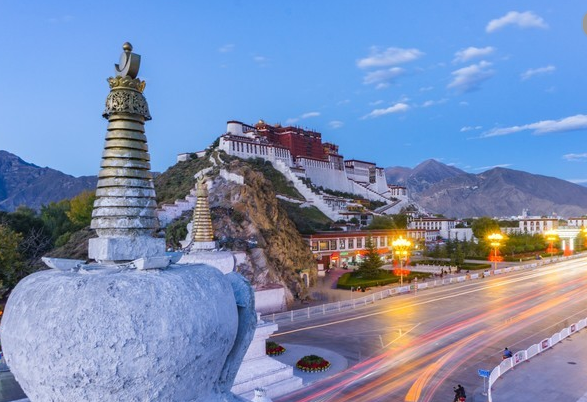 Jokhang Temple
The Jokhang, also known as the Qoikang Monastery, Jokang, Jokhang Temple, Jokhang Monastery and Zuglagkang, is a Buddhist temple in Barkhor Square in Lhasa, the capital city of Tibet. Tibetans, in general, consider this temple as the most sacred and important temple in Tibet. The temple is currently maintained by the Gelug school, but they accept worshipers from all sects of Buddhism. The temple's architectural style is a mixture of Indian vihara design, Tibetan and Nepalese design. 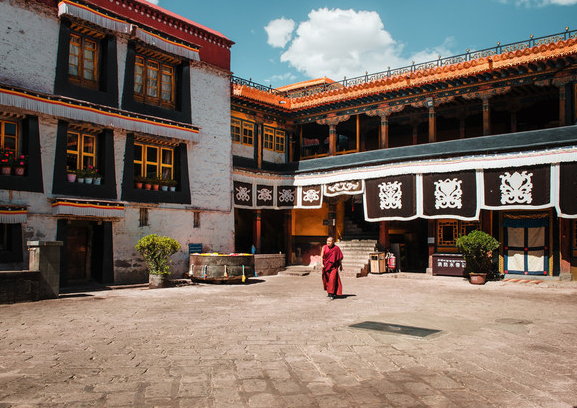 Barkhor Street
Barkhor Street is a bustling bazaar surround Jokhang Temple. It is a place showing the traditional outlook of Lhasa. The street was paved by hand-polished stone boards. The centre of the street sees a huge censer. In addition to its important place in Buddhism, Barkhor Street is also a business centre with merchants from many different countries. The shops here sell a great variety of goods and products, such as prayer flags, prayer wheels, Tibetan paintings, temple bowls, clothing, accessories, incense and Tibetan carpets. 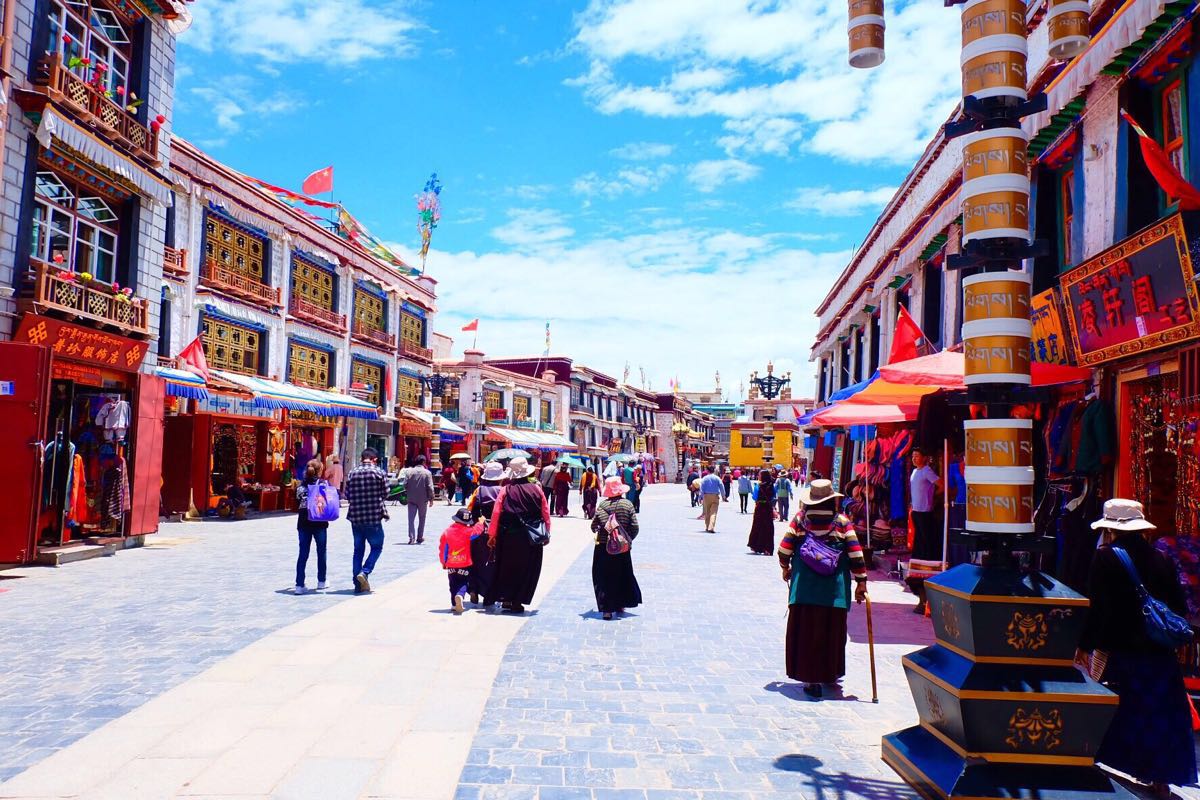 Ramoche Temple
Ramoche Temple is a Buddhist monastery is considered the most important temple in Lhasa after the Jokhang Temple. Situated in the northwest of the Tibetan capital of Lhasa, it is east of the Potala and north of the Jokhang, covering a total area of 4,000 square meters (almost one acre).

Sera Monastery
Sera Monastery is one of the "great three" Gelug university monasteries of Tibet, located 1.25 miles (2.01 km) north of Lhasa and about 5 km (3.1 mi) north of the Jokhang. The other two are Ganden Monastery and Drepung Monastery. The origin of its name is attributed to a fact that the site where the monastery was built was surrounded by wild roses in bloom. The original Sera Monastery is responsible for some 19 hermitages, including four nunneries, which are all located in the foot hills north of Lhasa. 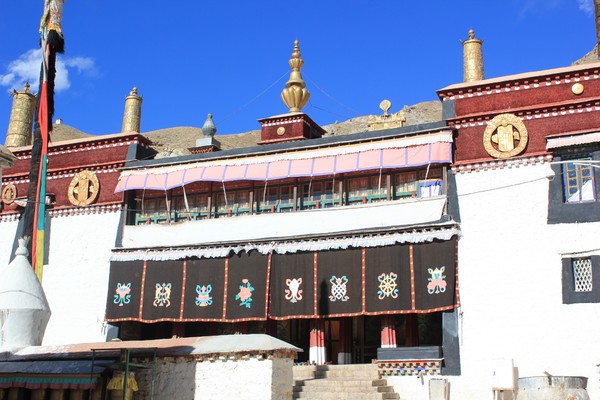 How to Get to Lhasa
Airline
Lhasa Gongga Airport is situated in Gongga county, about 90kms south of Lhasa City. Now there are flights to other cities in China such as Beijing, Shanghai, Chongqing, Xian, Guangzhou, Kunming, Chengdu, from Tibet and international flights such as to Nepal, Katmandu. There are buses between airport and CAAC Booking Office about one hour and a half.

Railway
Lhasa railway station is about 20kms to Potala Palace with a altitude of over 3600 meters high. Presently trains to Beijing, Chongqing, Chengdu, Shanghai, Guangzhou, Lanzhou, and Xinin are available. In the city center, you could take Bus No.9 to the railway station.

Highway
Lhasa has two coach stations: Bei Jiao and Dong Jiao. Bei Jiao Station is on No.11 Zhaji Road mainly for the long distance. The coaches to Naqu, Rikaze, Shannan, Ali, Shangri-la, etc are available. Dong Jiao Station is no No.3 East Jiangsu Road basically for short distance such as to Yangbajing, Ganden Temple, Dangxiong, Songba village, Qushui and so on.