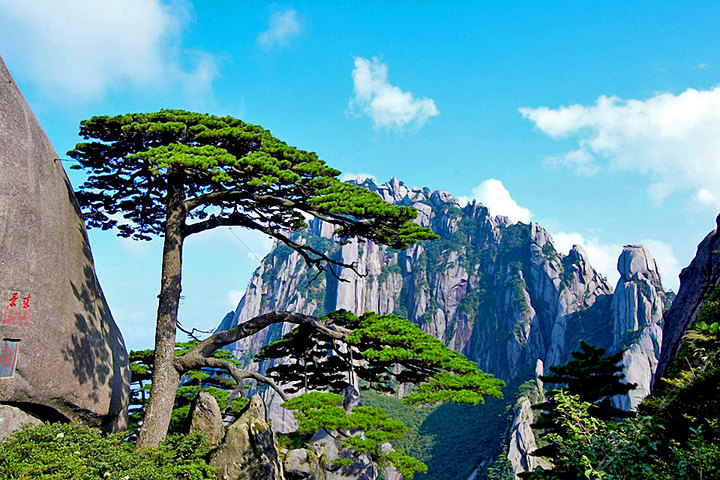 Overview of Huangshan
Huangshan city, called Huizhou in ancient times, It is bordered by Chizhou to the northwest, Xuancheng to the northeast, Jiangxi Province to the southwest and Zhejiang Province to the southeast. Huangshan is a prefecture-level city in southern Anhui province. Huangshan means Yellow Mountain in Chinese and the city is named after the famously scenic Yellow Mountains which cover much of the city's vast geographic expanse. The prefectural city of Huangshan includes three urban districts and four counties. The urban center of Huangshan was originally the city of Tunxi, and is now called Tunxi District. Locals still call the city Tunxi to distinguish urban core from other parts of Huangshan. 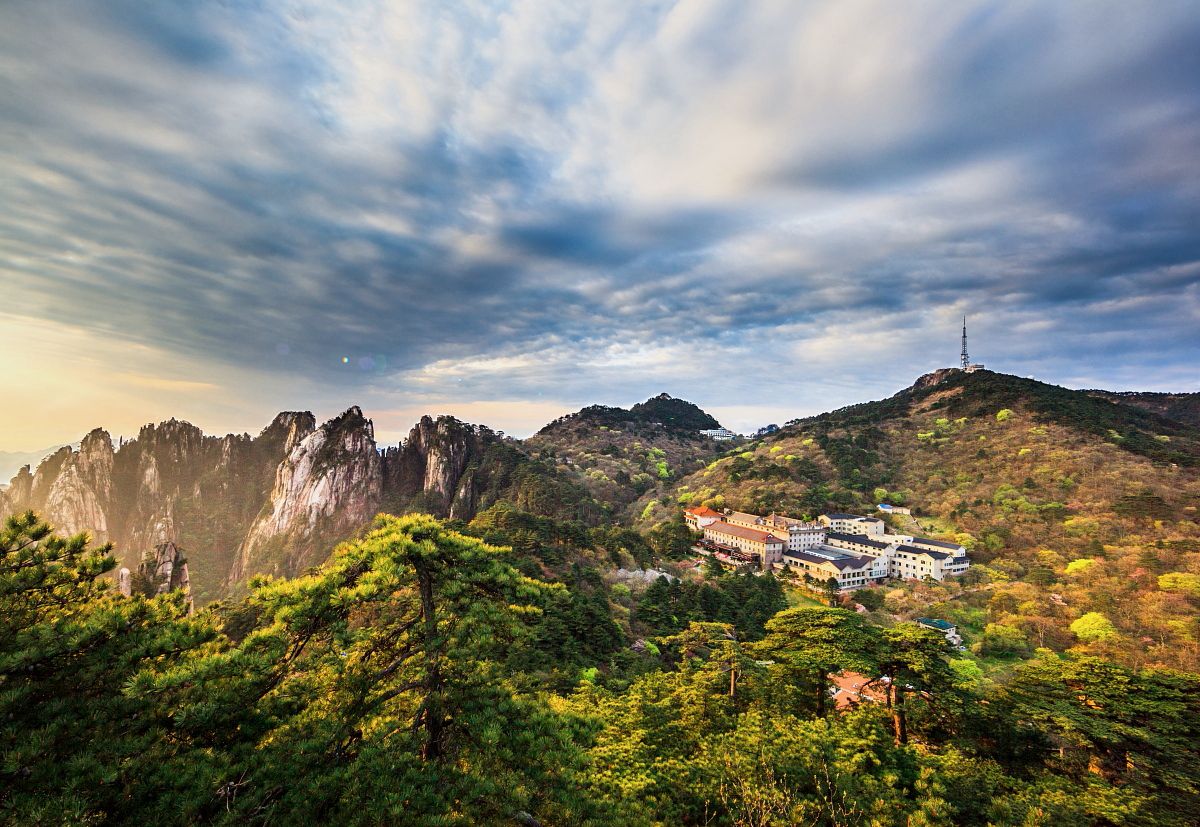 Huangshan history
Huangshan was formed approximately 100 million years ago and gained its unique rock formations in the Quaternary Glaciation.

During the Qin Dynasty, Huangshan was known as Yishan (Mount Yi). In 747 AD, its name was changed to Huangshan (Mount Huang) by imperial decree; the name is commonly thought to have been coined in honor of Huang Di (the Yellow Emperor), a legendary Chinese emperor, and the mythological ancestor of the Han Chinese. Huangshan is known for its stone steps, carved into the side of the mountain, of which there may be more than 60,000 throughout the area. The date at which work on the steps began is unknown, but they have been said to be more than 1,500 years old.

In 1982, Huangshan was declared a "site of scenic beauty and historic interest" by the State Council of the People's Republic of China. It was named a UNESCO World Heritage Site in 1990 for its scenery and for its role as a habitat for rare and threatened species. In 2002, Huangshan was named the "sister mountain" of Jungfrau in the Swiss Alps. 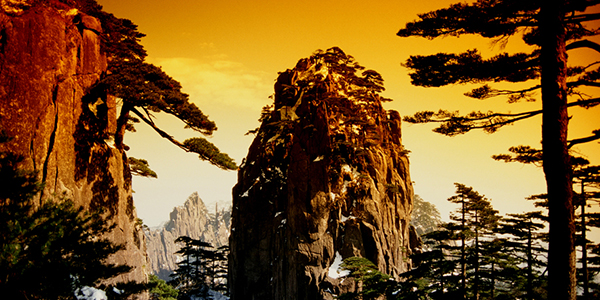 Huangshan in Four Reasons
Spring
Mt. Huangshan in spring is like a maiden - all is new, fresh and tender. Spring comes in April but its onset is delayed by three days for every 100 meters as you climb the mountain. Therefore, when wild flowers are brilliant and seedlings are shooting up at its foot, the plants half way up the mountain will be just awakening from their winter sleep and will not exhibit their beauty until a week later. The sound of birdsong is most pleasant in this quietness while you will be enchanted by the color changes as you climb your way up. Spring is probably the most propitious season for visiting Mt. Huangshan and is certainly the best time to view the many waterfalls due to the abundant precipitation.

Summer
It is hard to resist the charm of the cool green mountain sides in summer when an exuberance of plant life covers the valleys and peaks with a green blanket. The green trees and ivy mingle to form natural pavilions where you can sit and refresh yourself while enjoying the beautiful scenery with a cooling breeze to sooth you. Dawn in summer is most splendid as the rising sun lights the sky and the peaks and the plants and the whole world takes on a brilliant glow. After a storm, Mt. Huangshan becomes a world of water. Numerous streams and waterfalls compose an exciting and vigorous symphony. The Sea of Clouds during this season is not as vast as during autumn or winter but it revels in its brightness. If you are really lucky you will see a vivid rainbow flying over two peaks. Sunset is no less enchanting than sunrise. Mt. Huangshan in summer is the best resort in which to escape high temperatures of southern China.

Autumn
Autumn on the mountain is colorful due to the blue sky, white clouds, red maples and yellow fruits. At this time of the year the scenery can be compared with that of spring but with a mature beauty. If spring is like a bud ready to bloom, autumn is a flower showing its last significance before withering. Such is the beauty of the autumn scenery of Mt. Huangshan that it can be seen in many famous Chinese paintings. 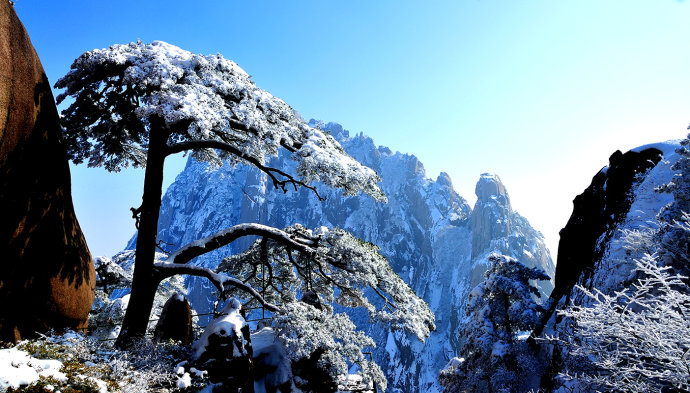 Winter
Winter Snowy Mt. Huangshan is like a crystal palace. Though winter lasts a long time in Huangshan, it is not as cold as you might expect. A poem has it that Mt. Huangshan is beautiful all year round but with the winter scenery being the best. The Sea of Clouds, one of the four wonders of Mt. Huangshan, appears more often in winter than in any other season. The spectacle of rimed trees sparkling in the sun is the privilege of winter alone for it is then that you may find yourself in a silver world with icy peaks, clusters of frosty corals suffused with a plentiful supply of the freshest of oxygen rich fresh air.

Tunxi Ancient Street
The street with centuries-old history dates back to the Song Dynasty (960-1279). Emperor Huizong (1082-1135) moved his seat of government to Lin'an (now is Hangzhou), when many architects and workmen were conscripted to construct the new capital. After returning to their hometown, they imitated the structural style to build architecture along the street, so Tunxi Ancient Street was formed. At the beginning of the Ming Dynasty (1368-1644), a merchant in Anhui invested money to build 47 stores so as to attract businessmen, which contributed to the communication of the street with outside world. Gradually it developed into the distribution center for materials in and out of Anhui in the Qing Dynasty (1644-1911).

The Yellow Mountain
The Yellow Mountains is one of the most famous and beautiful mountainous areas in China. It was listed as a World Heritage Site by UNESCO in 1990. Its spectacular natural scenery includes oddly-shaped pines and rocks, and mystical seas of cloud. 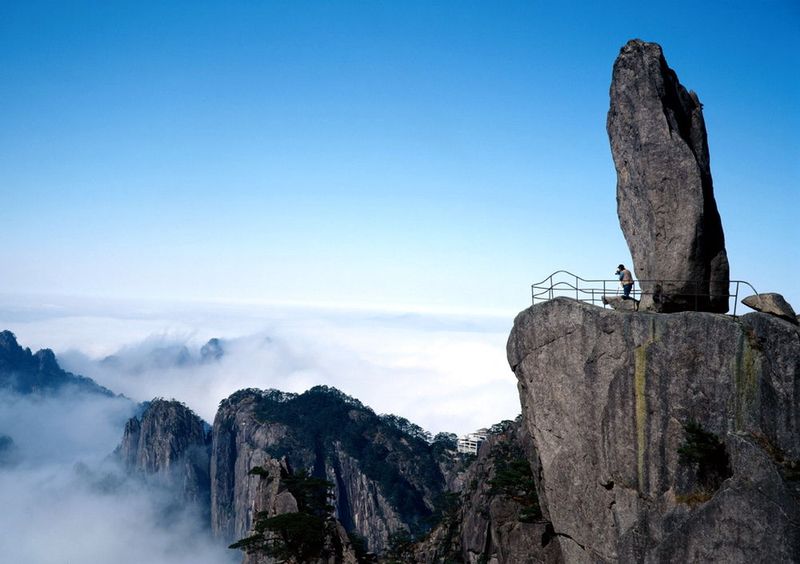 Xin ' an  River
The eastwards blue line one sees on the tourist map of Huangshan City indicates the Xin'an River that originated from Huaiyu Mountain in Xiuning County. The brook expands as it rolls down, joining the Hengjiang River at Tunxi. Here, it becomes the 200 kilometer long gently fIowing Xin'an River. 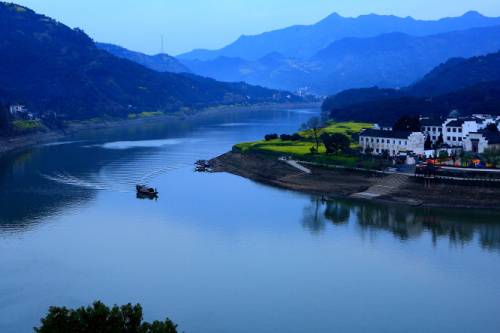 Hongcun Village
Hongcun is a village in Yi County in the historical Huizhou region of southern Anhui Province, China, near the southwest slope of Mount Huangshan. The village is arranged in the shape of an ox with the nearby hill (Leigang Hill) interpreted as the head, and two trees standing on it as the horns. Four bridges across the Jiyin stream can be seen as the legs whilst the houses of the village from the body. Inside the “body”, the Jiyin stream represents the intestines and various lakes such as the “South Lake” (Nanhu) form the other internal organs.The architecture and carvings of the approximately 150 residences dating back to the Ming and Qing Dynasties are said to be among the best of their kind in China. One of the biggest of the residences open to visitors, Chenzhi Hall, also contains a small museum. Together with Xidi, the village became a UNESCO World Heritage Site in 2000. Scenes from the film Crouching Tiger, Hidden Dragon were filmed on location in Hongcu. 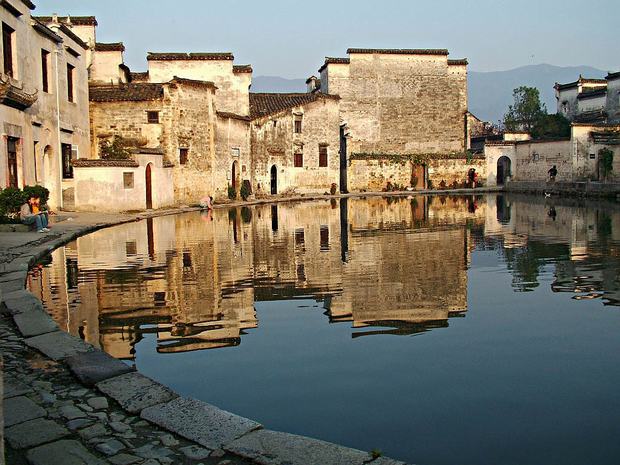