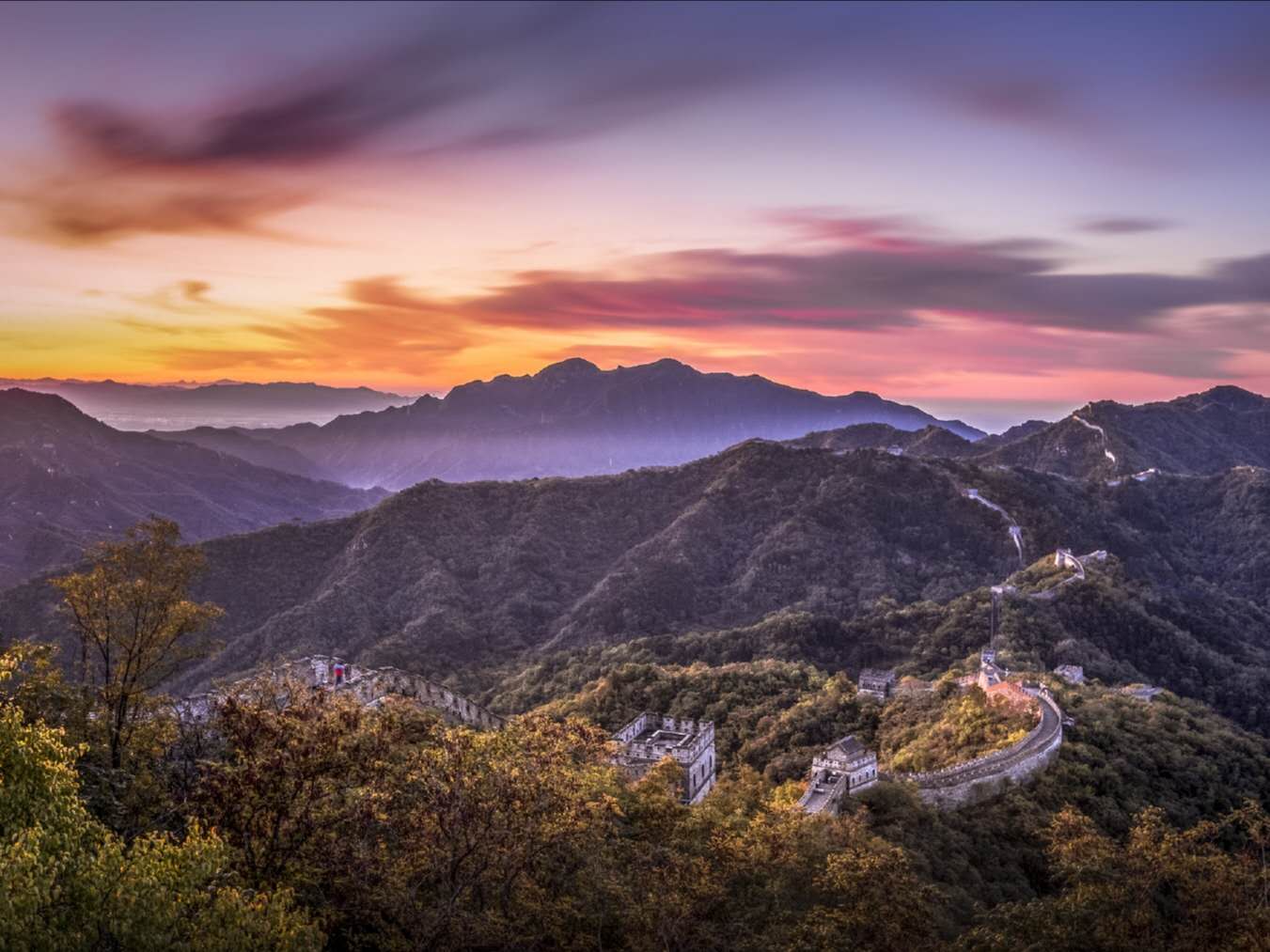 Introdution Of Beijing
The Constitution of the People's Republic of China declared Beijing as the Capital of the  Nation in 1949. Today, Beijing is the political and cultural center of the People's Republic of China.Beijing,Jing for short,is the nation'spolitical,economic,cultural andeducational center as well as China's most important center for international trade  and communications.Together with Xian, Luoyang, Kaifeng, Nanjing and Hangzhou,Beijing is one of the six ancient cities in China. It has been the heart and soul of politics and society long history and consequently there is an unparalleled wealth of discovery to delight  and  intrigue  travelers  as  they  explore Beijing's  ancient past and enjoy its exciting modern development.

As the capital of the People's Republic of China, Beijing is located innorthern China, close to Tianjin Municipality and partially surrounded by Hebei Province. The city covers an area of more than 16,410 square kilometers and has a population of 14.93 million people. Beijingis a city with four distinct seasons.Its best is late  spring and autumn. But autumn is taken as the golden tourist season of the year since there is sometimes in the spring of recent years, a yellow wind. The best time to visit Beijing is the months of May, September, and October when people can enjoy bright sunshine and blue skies.If you  like winter, you will have other chances to appreciate another landscape of Beijing. After skiing in Beihai and viewing the snowy sights on West Hill, enjoying the 2steaming  hotpot is the best choice, which is really the fun of tour in Beijing.

History Of Beijing
Some half a million years ago, Peking man lived in Zhoukoudian, in the southwestern suburbs of Beijing. The climate of that time was warmer and more humid than it is today. Forests and lakes in the area supported large numbers of living creatures. The fossil remains of Peking man, his stone tools and evidence of use of fire, as well as later tools of 18,000 years ago, bone needles and article of adornment from the age of Upper Cave Man are the earliest cultural relics on record in China today. Early in the third century BC, the first Emperor of Qin (Qin Shi Huang) set about conquering six states and unifying China.

The city of Ji was named administrative center of Guangyang Commandery, one of 36 prefectures in China's first feudal empire. For 10 centuries, through to the end of the Tang Dynasty (618-907), Ji remained a strategic trading and military center and the object of frequent power struggles. At the beginning of the Tang Dynasty, Ji was little different from any other large feudal cities.

Several centuries later, however, when the Tang was nearing a state of collapse, the Qidans (Khitans) came from the upper reaches of the Liaohe River and moved south to occupy Ji and make it their second capital. They called the city Nanjing (Southern Capital) or Yanjing. Emperor Taizong of the Liao Dynasty (916-1125) carried out reconstruction projects and built palaces, which were used as strongholds from which the Qidans set out to conquer the central plains of China.

After the collapse of the Qing Dynasty in 1911, China fell prey to the Northern Warlords and Kuomintang, Beijing suffered the same fate as the rest of China, hobbling along like an old camel without a sense of direction. The Chinese People's Liberation Army formally entered Beijing on January 31, 1949, opening a new chapter in the long history of the city. It was in Tian'anmen Square on October 1st, 1949, that Chairman Mao Zedong proclaimed the establishment of the People's Republic of China, with Beijing as its capital.

The city has changed totally since then. It has expanded from its old confines within the nine gates of the Inner Citywall(Zhengyangmen,Chongwenmen,Xuanwumen,Chaoyangmen,Dongzhimen,Fuchengmen,Xizhimen, Andingmen and Deshengmen) to the seven outer gates(Dongbianmen, Guangqumen, Xibianmen, Guang' anmen, Yongdingmen, Zuoanmen and Youanmen) and out into the suburbs, Beijing now covers an area of about 750 square kilometers, which includes a dozen new living districts built on the outskirts of town.

Tian'anmen Square is still the center of Beijing, Chang' an Boulevard now running 38 kilometers from Shijingshan in the west to Tongxian in the east. The palaces and city towers along both sides have been designated cultural relics for national protection. Former imperial residences and gardens have been opened for public viewing.

New buildings like the International Post Office and Bank of China have been built along the Second Ring Road, the former line of the Inner City wall. Old living quarters and blocks of traditional Beijing style buildings, such as Liulichang Culture Street, have been restored. Large scale construction has been undertaken along the Third Ring Road and the fourth Ring Road.

Future development in Beijing will continue to preserve the symmetry of the old city layout while integrating modern architectural design into the overall plan.

The Great Wall
As one of Seven Wonders of the World, the Great Wall of China is magnificent and unique ancient relic in the world. Badaling Section is the most well-preserved part of the Ming Dynasty, however, Mutianyu section is as great as Badaling but less touched and crowded. 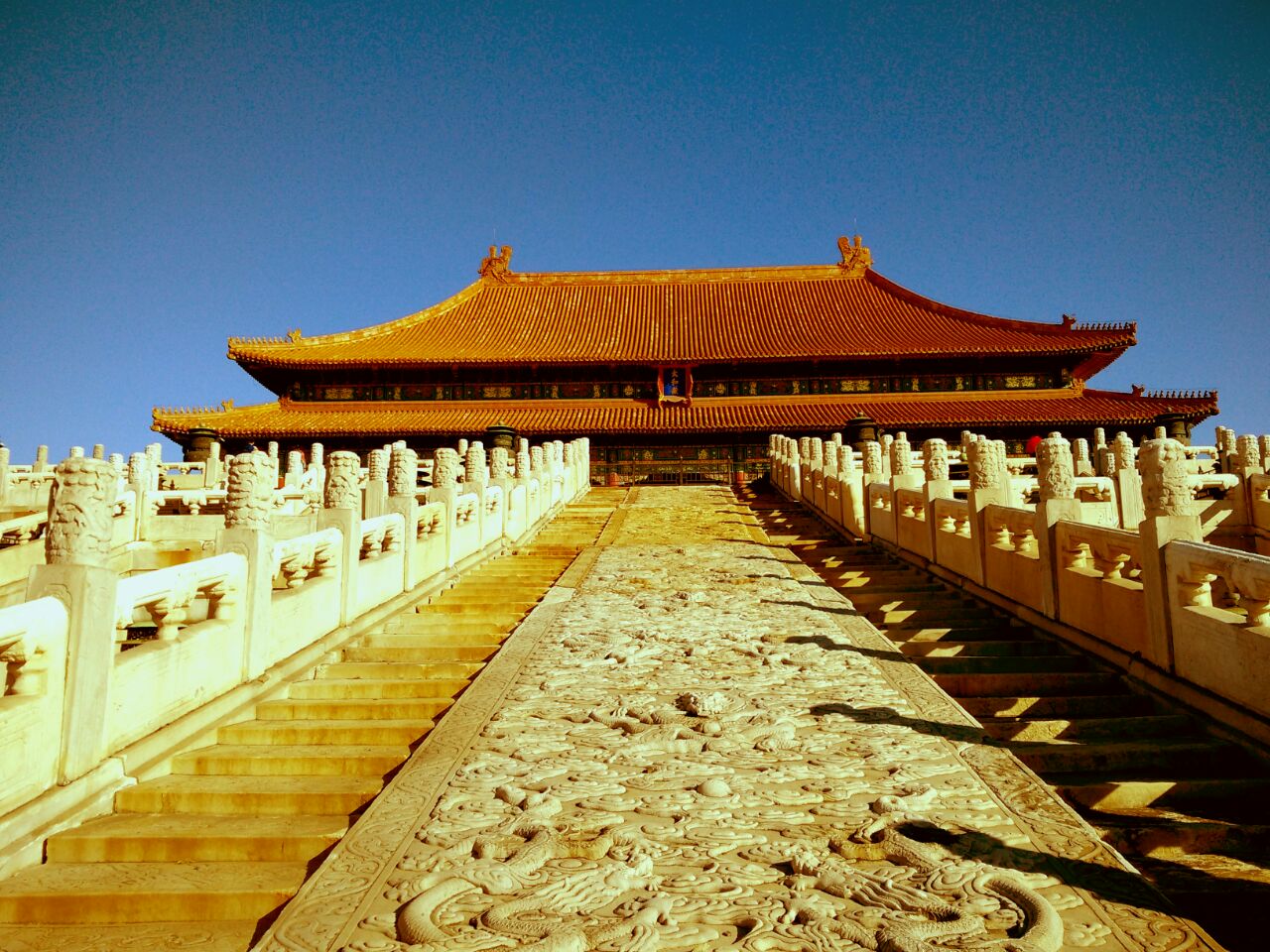 Temple of Heaven
Emperors in the Ming and Qing Dynasties set solemn rituals in Temple of Heaven to pray for a harvest. It has been one of the world cultural heritages since 1998, and the largest imperial ritual relics in the world. Located in the southeast of the Forbidden City, it is a great place to see the senior doing morning exercises such as playing tai chi now. 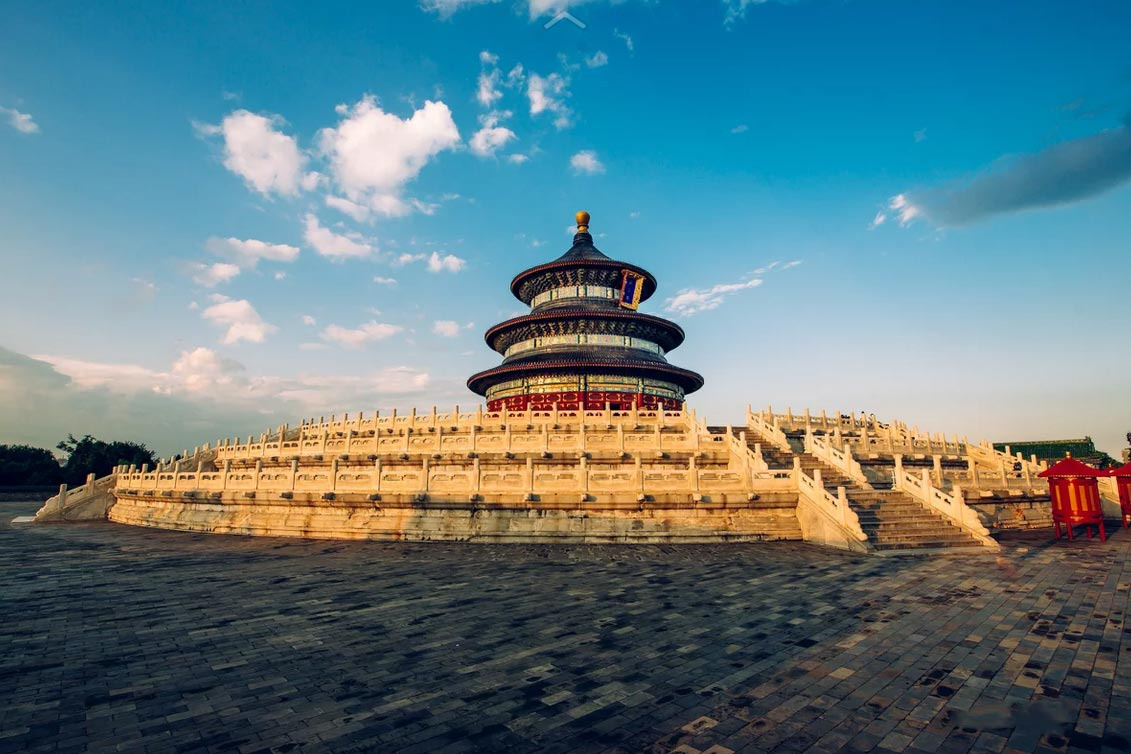 Tiananmen Square
Tiananmen Square is the heartland of Beijing, acknowledged as the largest city central square in the world. It is 500-meter wide from east to west and 880-meter long from south to north with a area of 44 hektares. The whole ground is paved with light granite slate disposed through special technology treatment. The flag-raising ceremony at sunrise and flag-lowering ceremony at sunset are the most magnificent rites. 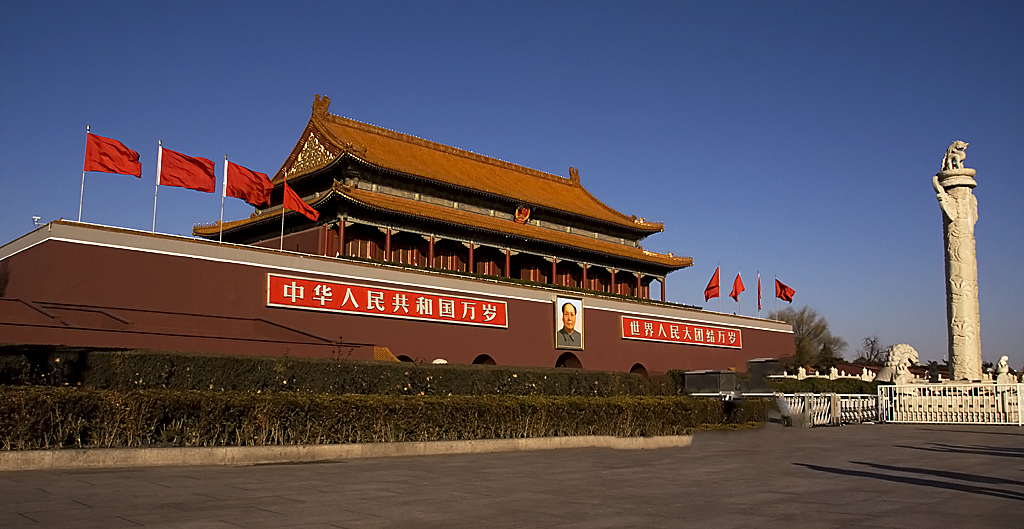 The Summer Palace
Summer Palace is the largest and most complete existing royal garden, reputed as the royal garden museum. Located in Haidian district, about 15km from Beijing center, Summer Palace covers an area of 290 hectares. Its predecessor was the Garden of Clear Ripples (Qingyiyuan) started in 1750 and burned down by the British and French allied troops in 1860. 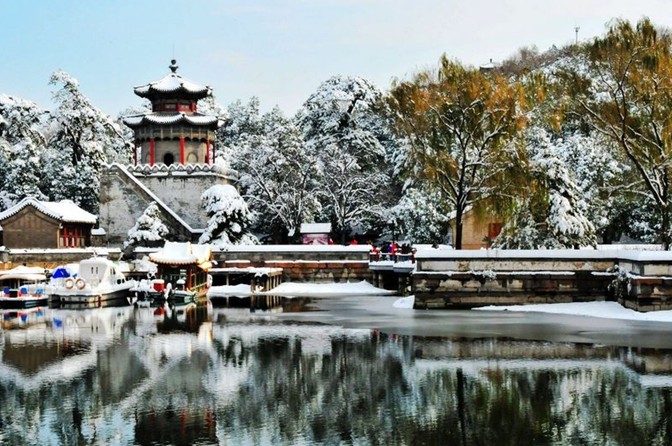 Peking Roast Duck
Peking Duck has the reputation of being the most delicious food Beijing has to offer. Eating Peking Duck is seen to be one of the two things you are absolutely supposed to do while in Beijing. The other one is climbing the Great Wall. 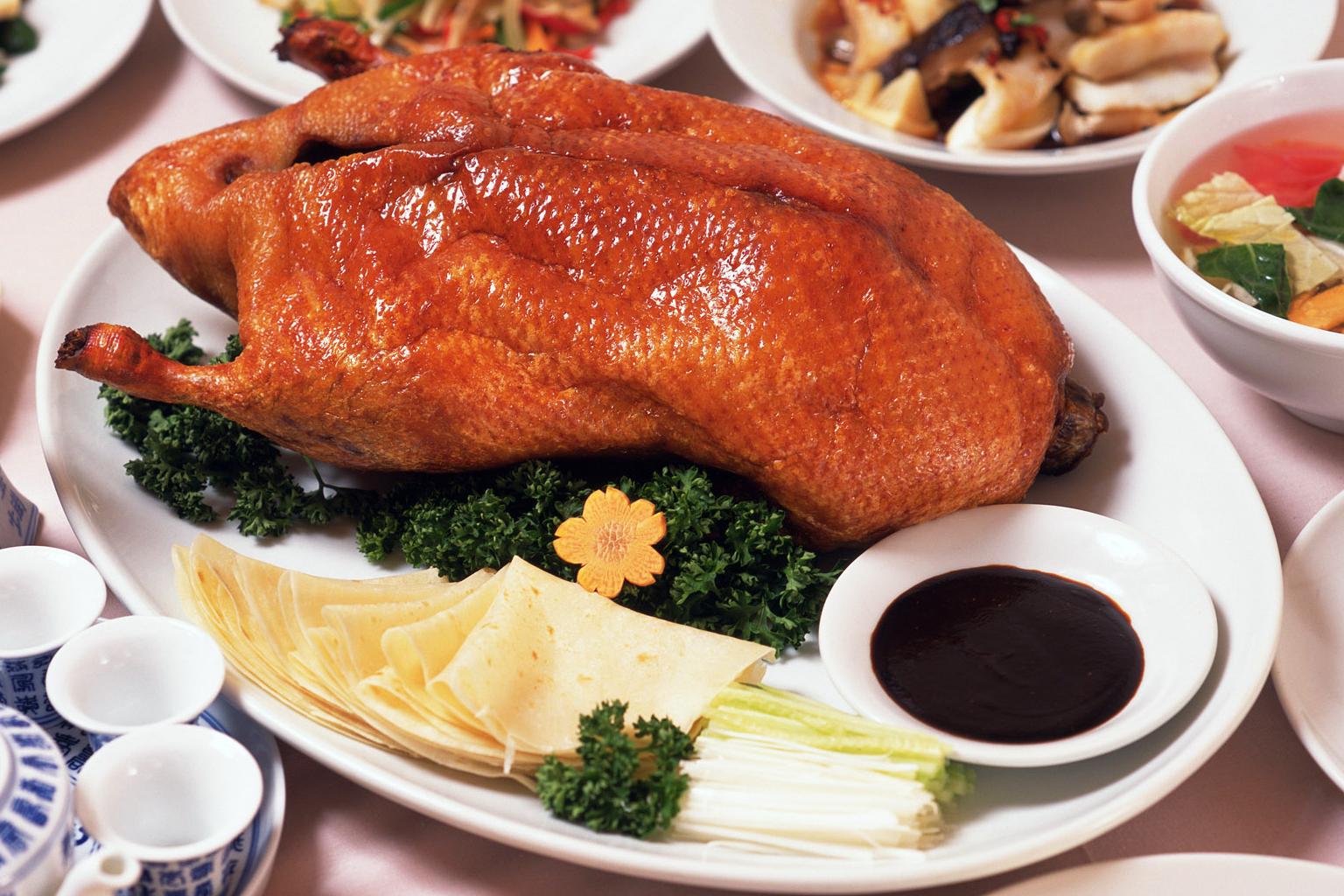 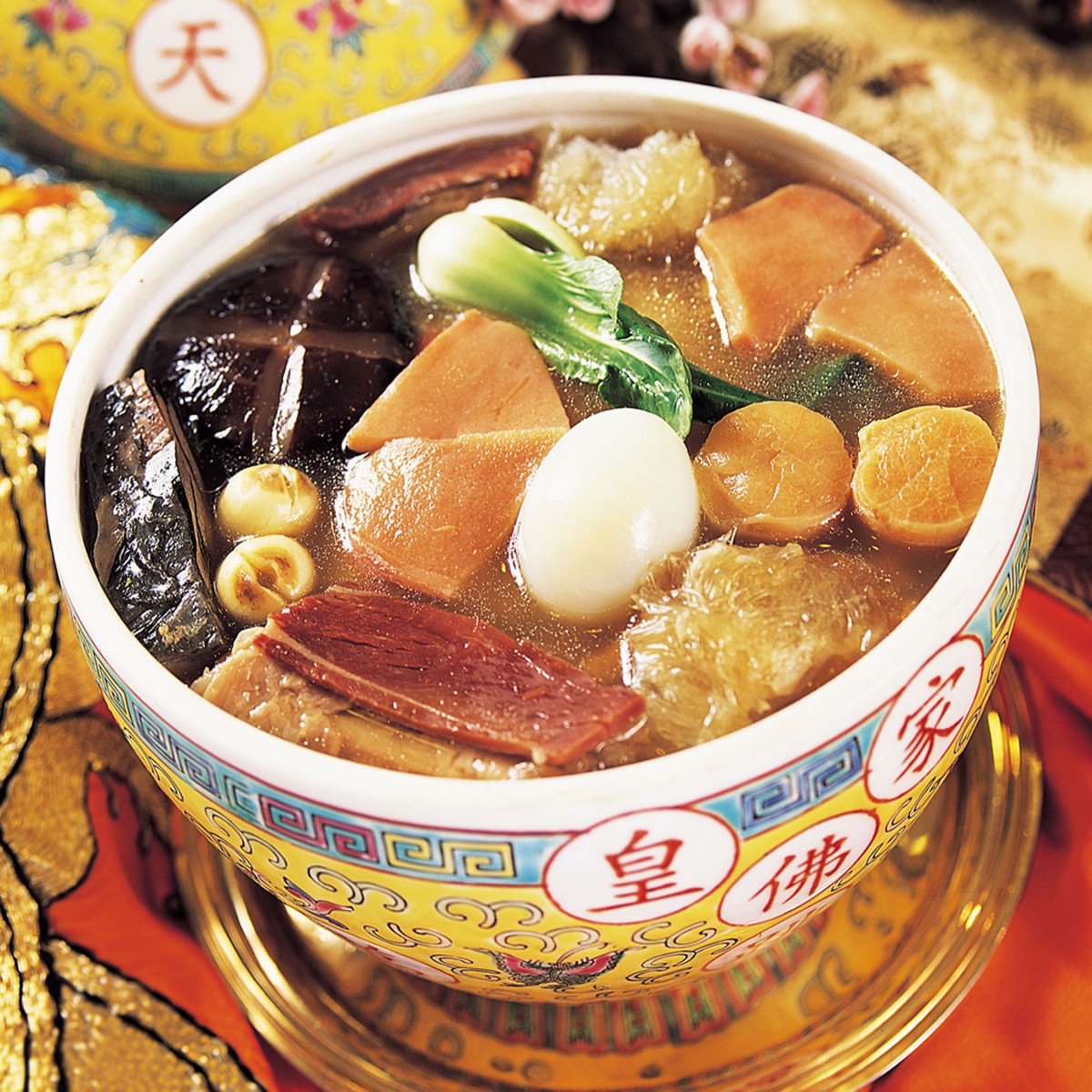 Hot Pot
Beijing winters can get very cold so "hot pot" is a natural favorite with local people. In recent years, Cantonese and Sichuan flavor hot pots have have grown in popularity, overtaking the more typical Beijing tradition of boiling thin slices of mutton in a seasoned broth (otherwise known as Mongolian hot pot). The basic ingredients of a hot pot meal include thinly sliced beef and mutton with fresh vegetables.

Climate
Beijiing enjoys a typical moderate continental climate. Its a typical city where the four seasons are very distinct: spring comes from April to May is warm with beautiful flowers decorated, but dry and windy. summer is hot , sometimes humid and rainy, the rainy days usually is from July to August. the best season in Beijing is Autumn. It’s cool and much comfortable with bright sunny sky. Winter is clear but cold with little snows now.

Population
Beijing is a metropolis with a huge population. According to the sampling survey in 2017, Beijing has nearly 19 million permanent residence with a transients of more than 3.5millon a year.

Beijing is the third largest city in china, just next to Chongqi and Shanghai. Along with chongqi, Shanghai and Tianjin , Beijing is one of the four municipalities directly under the jurisdiction of the central government.

Religion
China’s basic policy on religion is to respect and protect the freedom of religious belief. Everybody enjoy the freedom of belief. There are five mains in Beijing, even whole china. They are: Buddhism, Taoism, Islam, Christianity and Catholic. The Buddhist temples, Taoist temples, Islam Mosque, Catholic church an Christianity church are all available in Beijing. The Mosque at Niujie is a typical Arabesque Islam Mosque as well as the largest and longest in the history of the Islam Mosque in Beijing.

The Public Bus
To a great extant, we can say the public transportation system has witnessed the rapidly changes of this ancient city. In 1949, there are only 103 tramcars and 61buses with only 4 bus lines in the whole city. But today, within half a century development, Beijing has nearly 622 bus lines and a total of 19,000 public buses and 66,600taxis (up to 2006) on the streets and the number is keeping growing every year.

About the colors of the transportations, there are mainly three: green, yellow and red. Color green symbolize the environmental protection. Yellow represents this ancient imperial capital city, and red stands for the public transportation. Taking a public bus, it just costs one RMB and if you have a public transportation card, you will get 60% off to swipe your card.

The Roads in Beijing
The roads and streets of Beijing are built on the principle of“Rings encircling the city ”,Up to today, Beijing has 6 rings roads. Many expressways and highways stretch to the suburbs and different provinces.

In Beijing, each streets and roads are almost have Bicycle Lanes specially used for biking. Beijing has a nick name: the “kingdom of Bicycles”, it's a very convenient ways of transportations, especially in a crowed city like Beijing. Many of the Beijingers get on and off the work by Bikes to avoid the traffic jam and crowed bus seats.

There are many avenues and boulevards in the city, the most famous one is Chang’an Avenue ( Everlasting peace Avenue), runs from east to west in front of Tian’anmen Square through the right center of the old city. It's about over 46km long and 70m wide range from Tongzhou District in the east to Shijingshan District in the west. there are the broadest Bicycle Lanes on Chang’an Avenue in front of the Tian’anmen Rostrum.