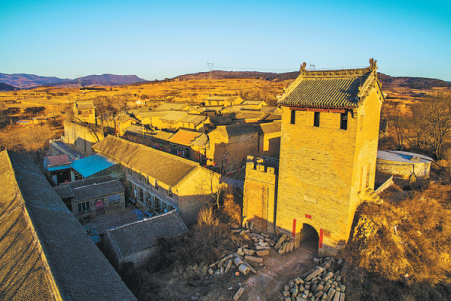 A village at the foot of Taihang Mountains and by the Danhe River has attracted the attention of cultural heritage researchers, who have hailed it as a living fossil of ancient China.

Chen Zhihua, a professor at Beijing-based Tsinghua University, deemed the village of Lianghu, located in Gaoping city in Shanxi province, a representative of well-preserved ancient villages built in the Ming (1368-1644) and Qing (1644-1911) dynasties.

However, local documents and legends show the village has a history of more than two millennia, dating back to the late Warring States Period (475-221 BC).

For locals, they can tell the exact history of the village should be more than 1,000 years, based on records from their family history books.

Shao Linlin, a village official and tour guide, told visitors about the beginning of the village's history.

"The first settlers in the village are two families with the surnames of Guo and Tian, who came here during the Tang Dynasty (618-907).Because of this, the settlement was called Lianghu-or two households-village," Shao said, adding the community became larger as other families moved in the following periods.

Most of the village's buildings, including a residence of a high-ranking general, were built in the Ming and Qing dynasties, according to Shao.

"But the Yuxu Guan Taoist temple was built at least 800 years ago," the official said.

Shao said he is proud of the village's status as a renowned historical and cultural village in China.

"We have 17 Buddhist and Taoist temples built in various periods, as well as more than 30 well-preserved courtyards built in the Ming and Qing dynasties," Shao said.

He said the high level of craftsmanship that local builders used to build the houses is one of the reasons why the ancient village has remained so intact to this date.

"Lianghu had been one of the most prosperous villages in the region. Locals accumulated their wealth through farming, commerce and handicraft. The wealthy people highlighted the quality of their residences, hoping the properties could be passed down to as many generations as possible," Shao explained.

Among all the ancient buildings, the most imposing is the former residence of Qing Dynasty official Tian Fengji.

Starting from a scholar, Tian later served as a civil official and a high-ranking general. After he retired, he returned to his birthplace in Lianghu to live a secluded life, according to Shao.

Being fond of education, Tian donated part of the residence as a school for local children and he himself was an instructor at the school.

In modern days, the local residents have devoted much energy to protecting these centuries-old legacies, according to Shao.

The village has repaired more than 30 courtyards and nearly 400 rooms, and implemented a tourism development plan highlighting both preservation and industrial growth.

The village's tourism revenue surpassed 2 million yuan ($300,000) in 2019 and the tourism industry has offered at least one job to each family, according to Shao.

Li Yali contributed to this story.