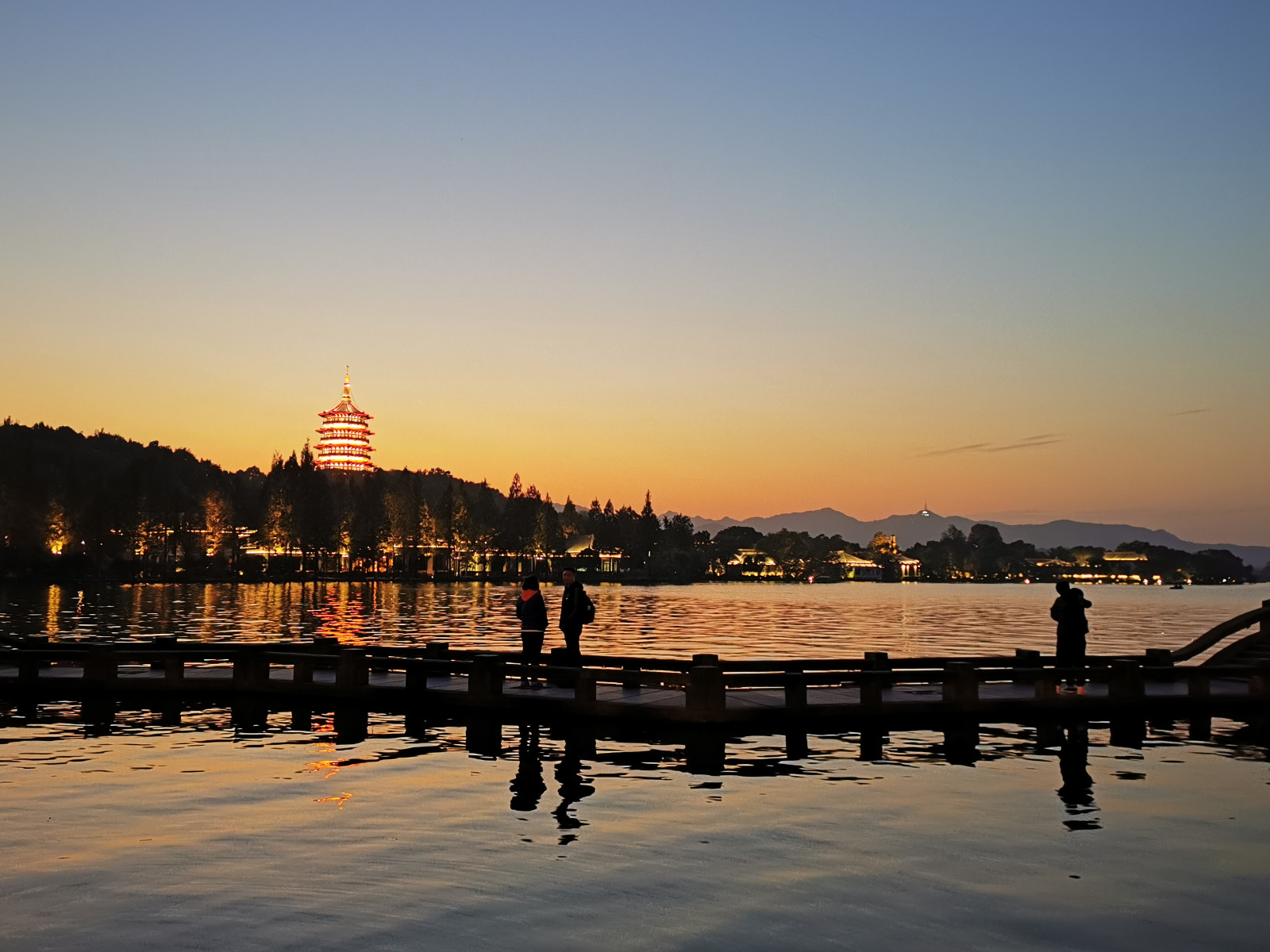 West Lake(Xi hu) is located in the western area of Hangzhou City's center. There are dozens of lakes called West Lake worldwide, but "West Lake" usually refers to the Hangzhou West Lake. It is surrounded by mountains on three sides. The average depth of West Lake is 0.8 meters, and the capacity is about 14,290,000 cubic meters. The lake is divided by Gu Shan, Bai, Su and Yanggong Causeways into five areas. Ordered by their areas, they are Outer West Lake, West Inner Lake, North Inner Lake, Little South Lake and Yue Lake. "Outer West Lake" is the largest. "Gu Shan" or Gu Hill is the largest natural island in the lake. Su & Bai Causeways run cross the lake. Three small man-made islands, "Xiao Ying Zhou", "Hu Xin Ting", "Ruan Gong Dun" , lie in the center of Outer West Lake. Thus, the basic layout is "one hill, two causeways, three islands, and five lakes". West Lake is not only famous for its picturesque landscape, it is also associated with many scholars, national heroes and revolutionary martyrs, thus embracing many aspects of Chinese culture. In addition, many ancient buildings, stone caves and engraved tablets in surrounding areas are among the most cherished national treasures of China, with significant artistic value.

History of Hangzhou West lake
Once an inlet of the Qiantang River, it was written Emperor Qin Shi Huang, the first ruler of imperial China, moored his boat at what is today West Lake on his way to the sea. Build up of silt from river currents and tide cut off the inlet and created a lagoon around the 4th century. During the Tang Dynasty, the lake was twice its current size, and would fluctuate over the centuries as West Lake periodically filled up with sediment and mud and was dredged, drained and dyked.

Maintaining the lake and dealing with droughts were two goals that shaped the history of the lake. Attempting to control the water in the Tang Dynasty during the late eighth century, governor Li Mi built wells and conduits to send water from the lake into surrounding farmlands. Later, famed poet and governor Bai Juyi built dykes and dams and had the Bai Causeway, named after it's creator, built between Broken Bridge and Solitary Island (Gu Shan). Another major causeway named for its poet-governor creator, the Su Causeway, was built from mud gathered by a massive dredging of West Lake by Su Shi in the Song Dynasty during the late 11th century.

While West Lake languished in neglect during the Mongol-led Yuan Dynasty, it regained attention during the Ming Dynasty.

Dredging was used to lengthen the Su Causeway and build the Yanggong Causeway. The islands Xuxin Tang and Xiao Ying Zhou were also created and three small pagodas, known as the Three Ponds, were built.

During their visits to West Lake, Qing Emperors Kangxi and later Qianlong composed their list of "Ten Scenic Spots" around.

West Lake, which were pounced upon by local officials who erected steles carved with replicas of the royal handwriting in the appropriate spots.

After the establishment of the Republic of China, renovation continued and resulted in the building of numerous parks around the lake. One such park, formerly the imperial hideaway Solitary Island (Gu Shan), was opened to the public and populated with monuments like the tomb of Qiu Jin.

Ten Scenes of West lake Hangzhou:
Traditionally, there are ten best-known scenic spots on the Xi Hú, each remembered by a four-character epithet. Collectively, they are known as the "Ten Scenes of Xi Hú" (10 Scenic Spots in Xi Hú ????). Each is marked by a stela with the epithet written in the calligraphy of the Qianlong Emperor. They are:

Dawn on the Su Causeway in Spring (????)
Dawn on the Su Causeway in Spring tops the list of the ten best known sights in Hangzhou. The causeway was built during the Northern Song Dynasty by Su Dongpo (1037-1101), a great scholar and famous poet, and was named after him. Stretching 2.8 kilometers (1.7 miles), it includes six bridges and is heavily sheltered by green vegetation. When spring comes, the whole causeway is blanketed by peach blossoms and weeping willows, creating an especially charming scene. 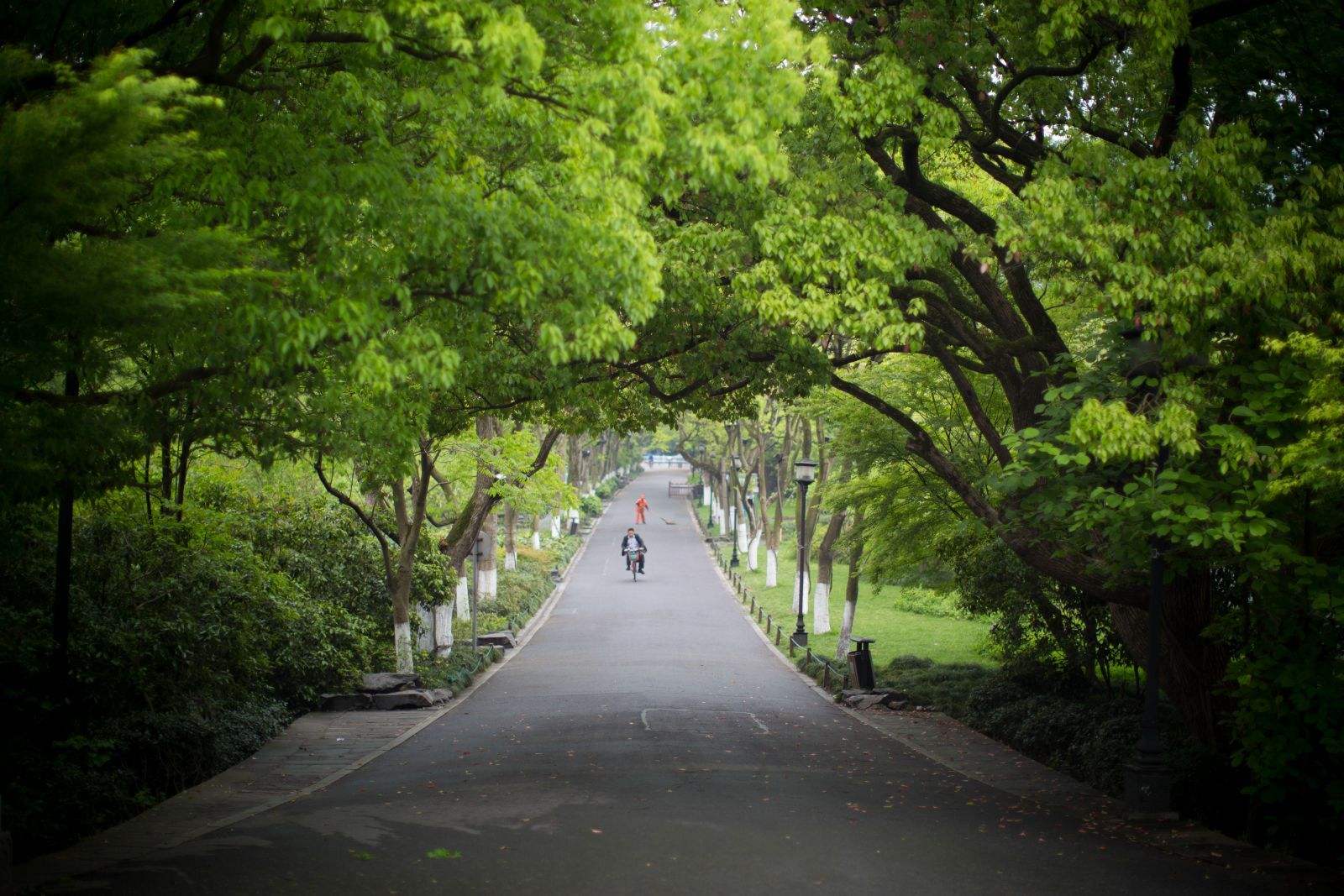 Curved Yard and Lotus Pool in Summer (????)
This particular scene has earned its name from the fact that it had an abundance of lotus plants growing along its shores, which was known as Crooked Courtyard. It was also the location of a winery. The "perfume" produced by the combination of the scent of lotus flowers and wine, to which was added the scent of the cool breeze from the lake, was said to be positively intoxicating. Though the winery is no more, the cool evening breeze from the lake still blows and the lotus plants still thrive along the shores of Crooked Courtyard, which has been converted into a public park. 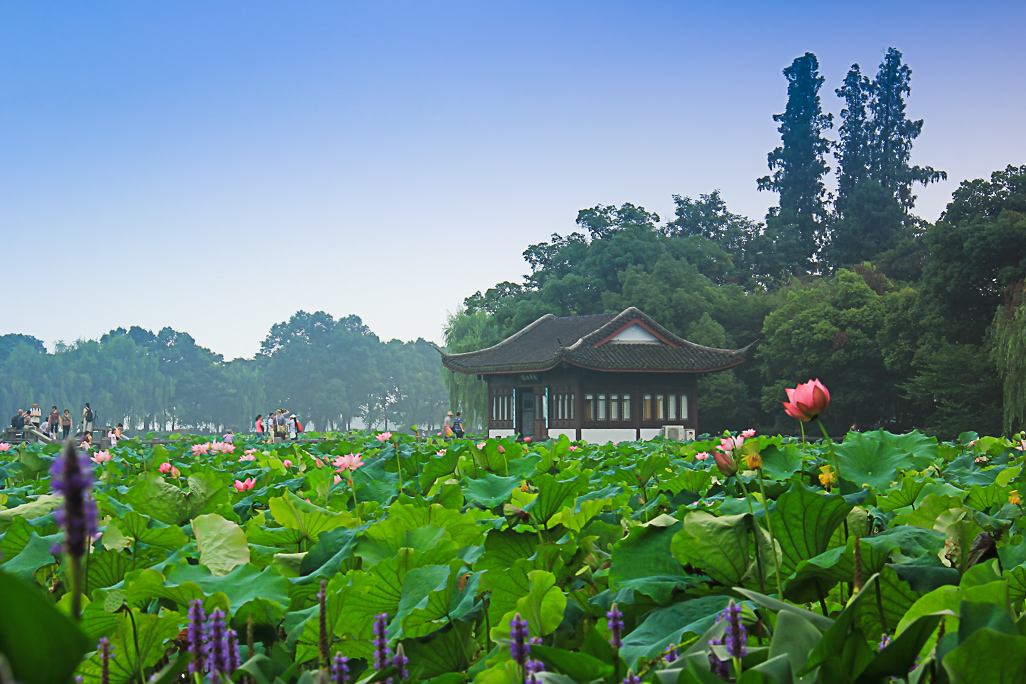 Moon over the Peaceful Lake in Autumn (????)
This scene is seen from the western end of Bai Causeway. The teahouse with its cement terrace bounded on three sides by water, became one of the traditional places to view West Lake, especially on Mid-Autumn night when the moon is full and bright, so it was named as "Autumn Moon on Calm Lake". This scenic spot covers an area of 6000 square meters (7176 square yards). Various garden plants and flowers intermingle with pavilions and platforms. 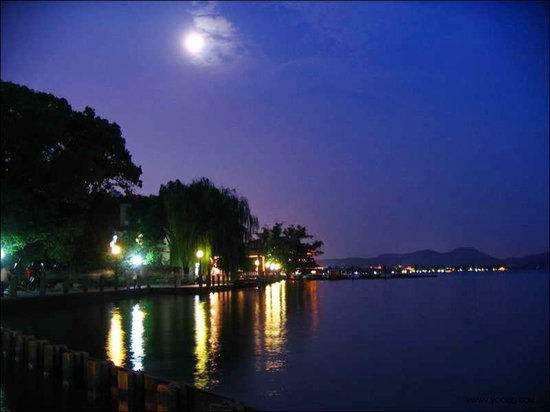 Remnant Snow on the Bridge in Winter (????)
The most romantic, in origin, of the ten scenic sites is surely the one called Melting Snow on Broken Bridge. According to legend, Broken Bridge, which is not really broken, but is a traditional arched stone bridge, is the site where two lovers, Xu Xian and a beautiful maiden, who is actually a white snake, met and fell madly in love. In early spring, when the snow begins to melt, it melts on one side of the bridge first, due the fact that the other side is in shade, which gives the bridge a split image. Viewed from a distance, it looks as if one half of the bridge has been ripped off, since the snowy side blends perfectly in with the surrounding landscape (hence the bridge's name)? 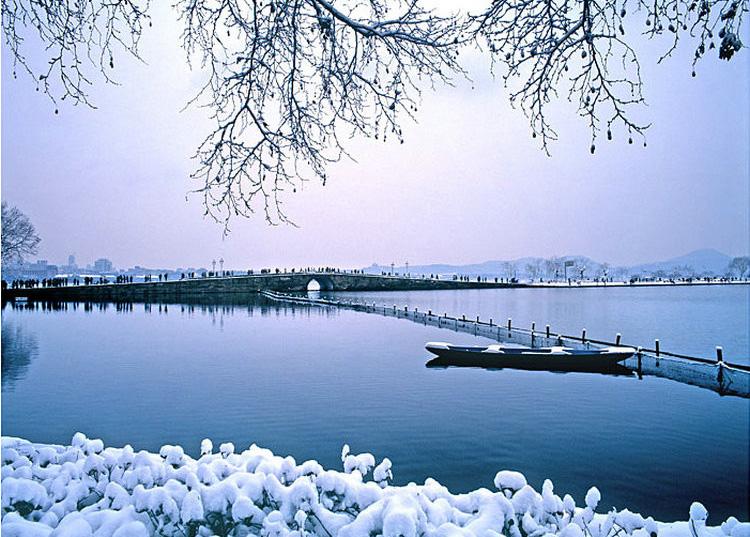 Leifeng Pagoda in the Sunset (????)
The stone arched bridge is at the eastern end of the Bai Causeway. The legendary tale of Lady White Snake took place here. After a snowfall, the snow on the sunny side melts first, while snow on the shaded side still lingers. Looking from afar, the bridge appears to be broken, thus the name. 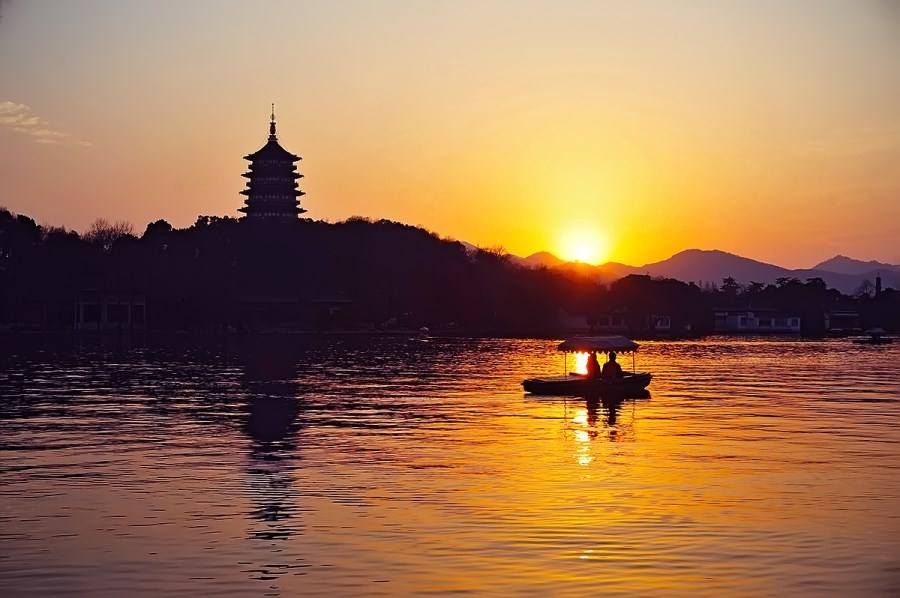 Two Peaks Piercing the Clouds (????)
Most visitors to West Lake are so fascinated by the lake itself that they often don't notice the surroundings. At the site called Twin Peaks Piercing the Clouds, visitors are advised to also lift their gaze from the lake's surface and behold the view on the other side of the lake, where one is rewarded by the sight of two mountain peaks, separated by the short distance of about five kilometers, at the northern rim of the lake. On certain days with low-lying clouds, or on other days when a low-lying fog is present, it is as if these twin peaks pierce through the clouds, the fog, etc., hence the site's name. 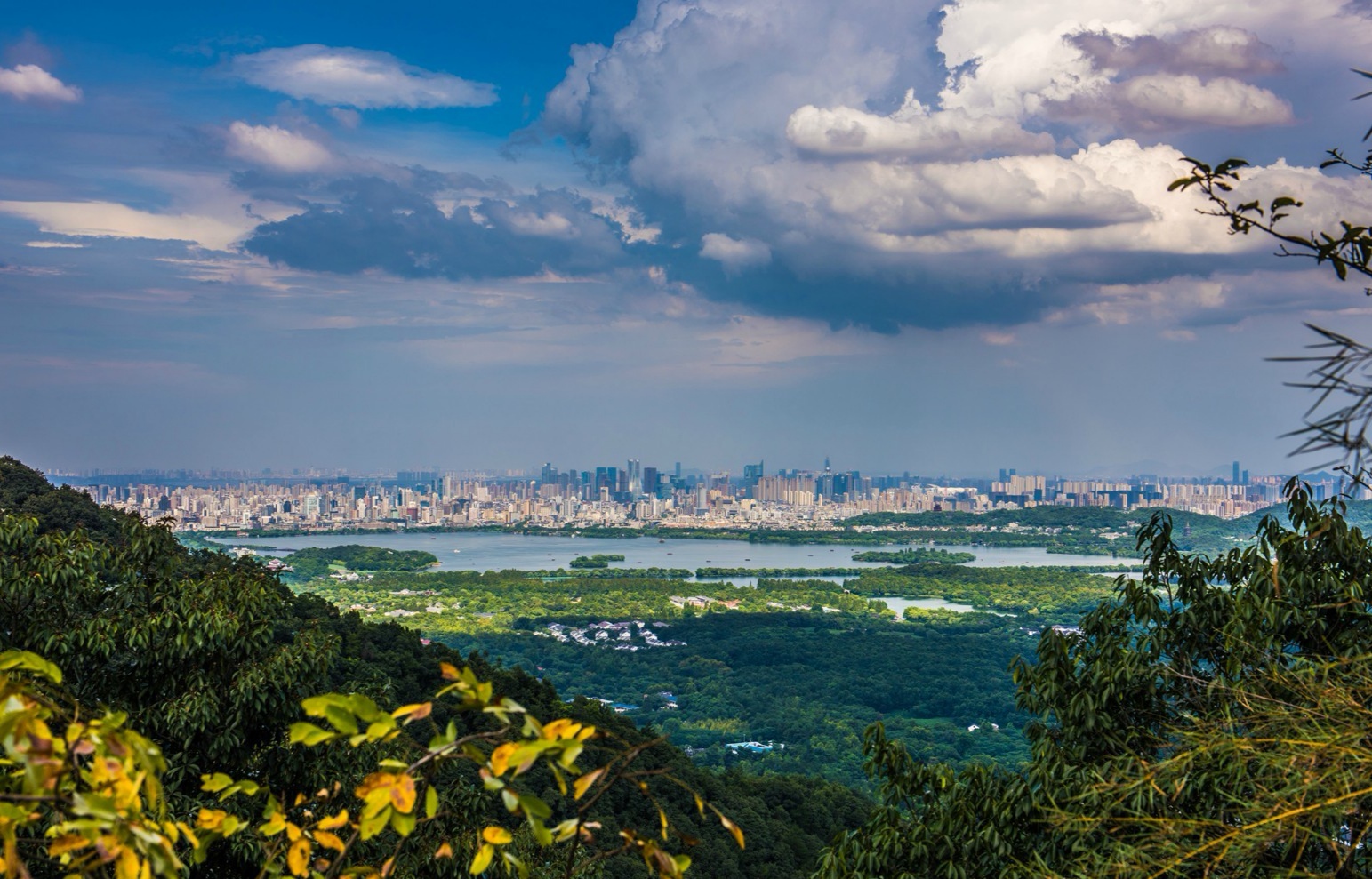 Orioles Singing in the Willows (????)
During the Southern Song Dynasty, an imperial garden, featuring especially weeping willow trees - which is almost always the perfect complement to a seascape - was built on this site. The imperial garden has since become a public park, replete with pavilions, bridges and lawns, and of course the orioles still visit the willows, where they sing as beautifully as when the emperor came here to listen to their song. 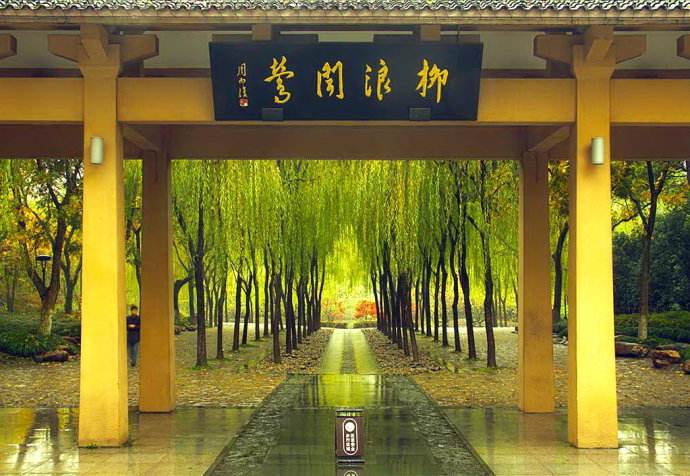 Fish Viewing at the Flower Pond (????)
This spot is located at the southern end of Su Causeway. A clean stream flows from Huajia Hill to join West Lake here, and many flowers grow where the fresh water flows in, so it called "Flowery Harbor". This area now has been made into a 22 hectare (54 acre) park with many varieties of trees and flowers, featuring a peony garden which blooms in April and a goldfish pond which is the famous site for viewing fish. 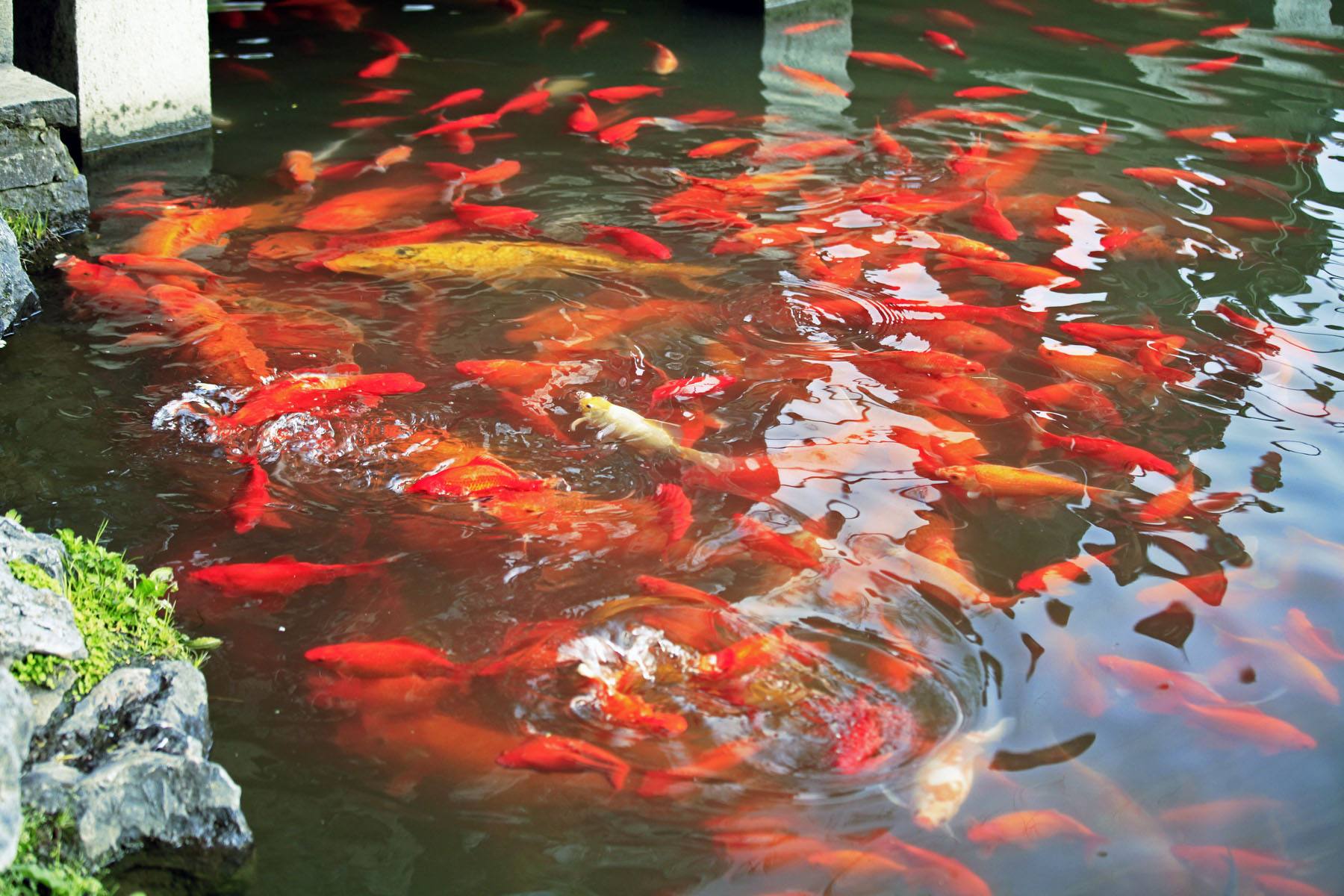 Three Ponds Mirroring the Moon (????)
Three miniature stone pagodas, which act like beacons, built over 800 years ago and 2 meters in height, are the centerpiece of the scenic spot called "Three Pools Mirroring the Moon". To the west of Three Pools Mirroring the Moon Island stand rounded hollow stone pagodas with five round holes like windows around the top and bottom levels. On the night of the Mid-Autumn festival, when the moon shines full and bright in the sky, a candle is lit inside each of the pagodas. The light from the holes and the moon cast their reflections on the water, hence the name. 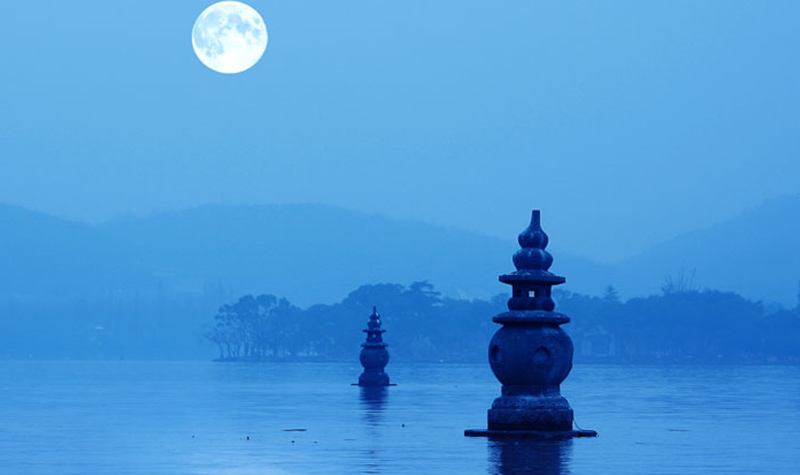 Evening Bell Ringing at the Nanping Hill (????)
This site, like most of the other sites at West Lake, is to be enjoyed to its fullest under certain specific conditions; Evening Bell Ringing at Nanping Mountain, as the name suggests, is to be enjoyed at dusk, when the sun slowly sets, its softened rays casting their multi-colored reflections on the surface of the lake. At this hour the huge bell of Jingxi Temple peals, its clear, forceful sound reverberating across the lake, as if amplified in the still evening air, calling for humility and reminding Buddhists of their age-old religious heritage - and indeed, reminding anyone who experiences this beautiful setting of his or her ultimate smallness within the larger scope of things. 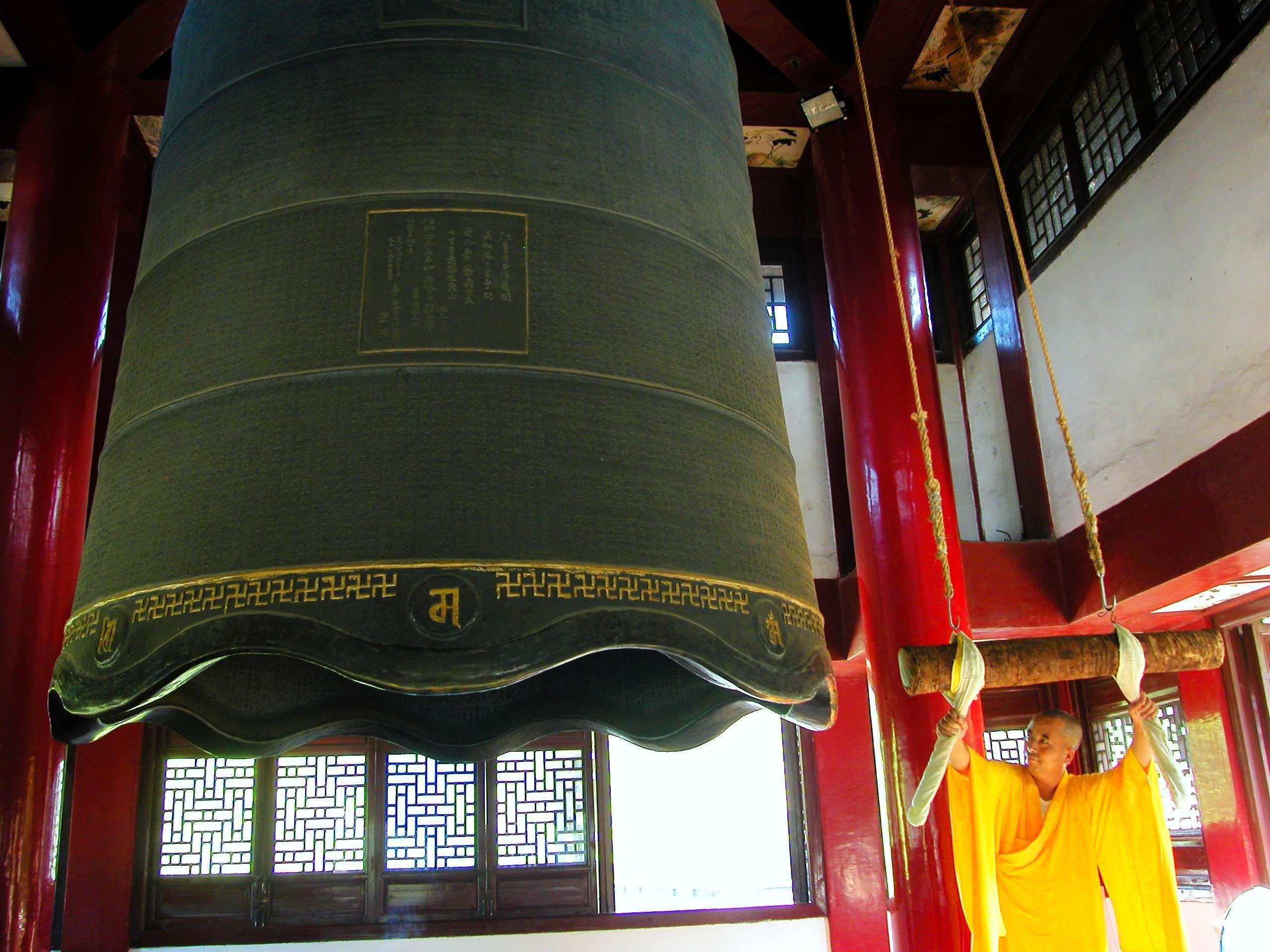