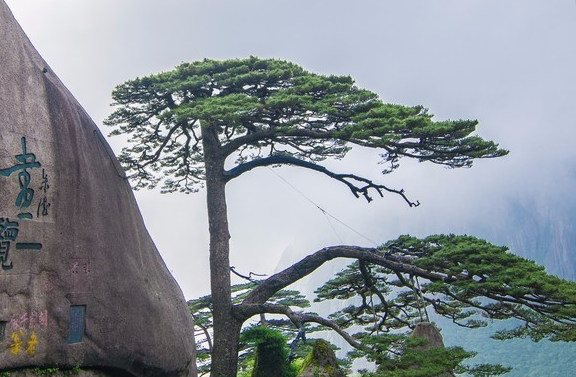 Overview of Yellow Mountain
Yellow Mountainis a mountain range in southern Anhui province in eastern China. Vegetation on the range is thickest below 1,100 meters (3,600 ft), with trees growing up to the treeline at 1,800 meters (5,900 ft).

It is one of the most famous and beautiful mountains in China. It is said that if you have visited Mt.Huangshan, then you don’t have to visit other mountains. So to speak, Mt. Huangshan has almost all the unique features that a mountain could have. The steep cliffs, dense pine trees, stones of odd shapes, amazing cloud sea, high peaks, deep valleys and hot springs describe the secret workings of nature.

History
During the Qin Dynasty, Yellow Mountains was known as Yishan (Mount Yi). In 747 AD, its name was changed to Huangshan (Mount Huang) by imperial decree; the name is commonly thought to have been coined in honor of Huang Di (the Yellow Emperor), a legendary Chinese emperor, and the mythological ancestor of the Han Chinese. One legend states that Huangshan was the location from which the Yellow Emperor ascended to Heaven. Another legend states that the Yellow Emperor "cultivated moral character and refined Pills of Immortality in the mountains, and in so doing gave the mountains his name. The first use of this name "Yellow mountains" often is attributed to Chinese poet Li Bai. Huangshan was fairly inaccessible and little-known in ancient times, but its change of name in 747 AD seems to have brought the area more attention; from then on, the area was visited frequently and many temples were built there.

Huangshan is known for its stone steps, carved into the side of the mountain, of which there may be more than 60,000 throughout the area. The date at which work on the steps began is unknown, but they have been said to be more than 1,500 years old.

Over the years, many scenic spots and physical features on the mountain have been named; many of the names have narratives behind them. For example, one legend tells of a man who did not believe the tales of Yellow mountain's beauty and went to the mountains to see them; almost immediately, he was converted to the same view. One of the peaks he is said to have visited was named Shixin (??), roughly meaning "start to believe."

In 1982, Yellow mountain was declared a "site of scenic beauty and historic interest" by the State Council of the People's Republic of China. It was named a UNESCO World Heritage Site in 1990 for its scenery and for its role as a habitat for rare and threatened species. 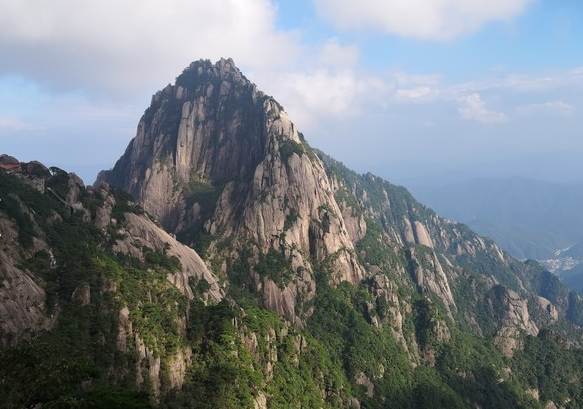 Weather&Climate
Yellow Mountain (Mt. Huangshan) is situated in South China, near the ocean, frequented by the warm air mass full of vapor from the Pacific, so it has many raining and cloudy days and less sunshine. The sun shines on an average of 151 days a year.Rain falls on an average of 183 days a year. Annual precipitation of 2395 mm with the highest of 3327 mm and the lowest of 1544 mm, concentrated on May, June, July, August and September. 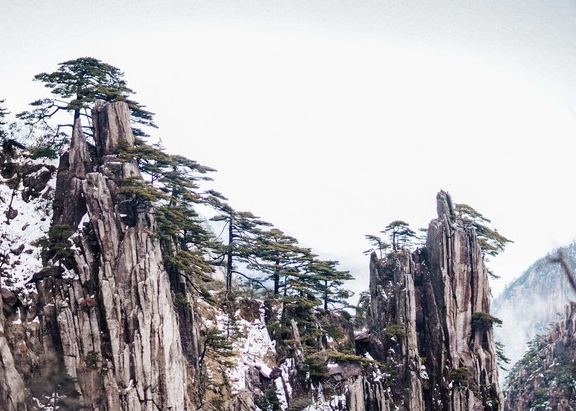 Because of inconstancy of the weather, we'd like to give you two suggestions: Take an umbrella or raincoat with you up to the mountain even it'll be a sunny day according to the weather forecast, for weather report is not always right, due to complicated terrain of the mountain. Grasp opportunity for great view when the weather is good.

In 2002, Huangshan was named the "sister mountain" of Jungfrau in the Swiss Alps.